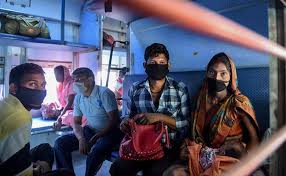 New Delhi, May 16: The Indian Railways has operated 1,074 Shramik Special trains since May 1, ferrying more than 14 lakh workers, it said Saturday.

On Friday, the Railways said it had received more than 1,000 approvals from states in the last 15 days to ferry migrants home, with most workers being received by Uttar Pradesh, followed by Bihar.

Railway Minister Piyush Goyal hailed the active participation of UP and Bihar in processing trains for their migrants, saying 80 per cent of the labour trains are terminating in these two states.

During the last three days, more than 2 lakh persons have been transported per day. In days to come, it is expected to be scaled up to 3 lakh passengers per day, the Railways said.

Out of the trains which have terminated so far, the maximum has been in Uttar Pradesh (387). Uttar Pradesh has given approval for 526 trains, followed by Bihar for 269 trains, and Madhya Pradesh for 81 trains.

The number stands at 50 for Jharkhand, 52 for Odisha, 23 for Rajasthan and 9 for West Bengal, the data showed.

The operation of these trains has, however, led to a political mudslinging with the Opposition accusing the Centre of charging fare from migrants.

The Centre has clarified that the fare is being shared on a 85-15 ratio by the Railways and the state governments. It has said it has the capacity to run 300 Shramik Specials per day.

Goyal had appealed to states like West Bengal, Rajasthan, Chhattisgarh and Jharkhand to approve more trains.

A Shramik Special train carries around 1,700 passengers, instead of the earlier 1,200, to ferry as many workers home as possible.

Initially these trains had no scheduled stoppages during the journey, but the Railways now allows up to three stoppages in the destination states.

While railways is yet to announce the cost incurred on these special services, officials indicated that the national transporter is spending around Rs 80 lakh per service.

Since the Shramik Special service started, Gujarat has remained the top originating state, followed by Kerala.

Earlier, the Railways drew a flak from opposition parties for charging for these services.

In its guidelines, the national transporter has said the trains will ply only if they have 90 percent occupancy.